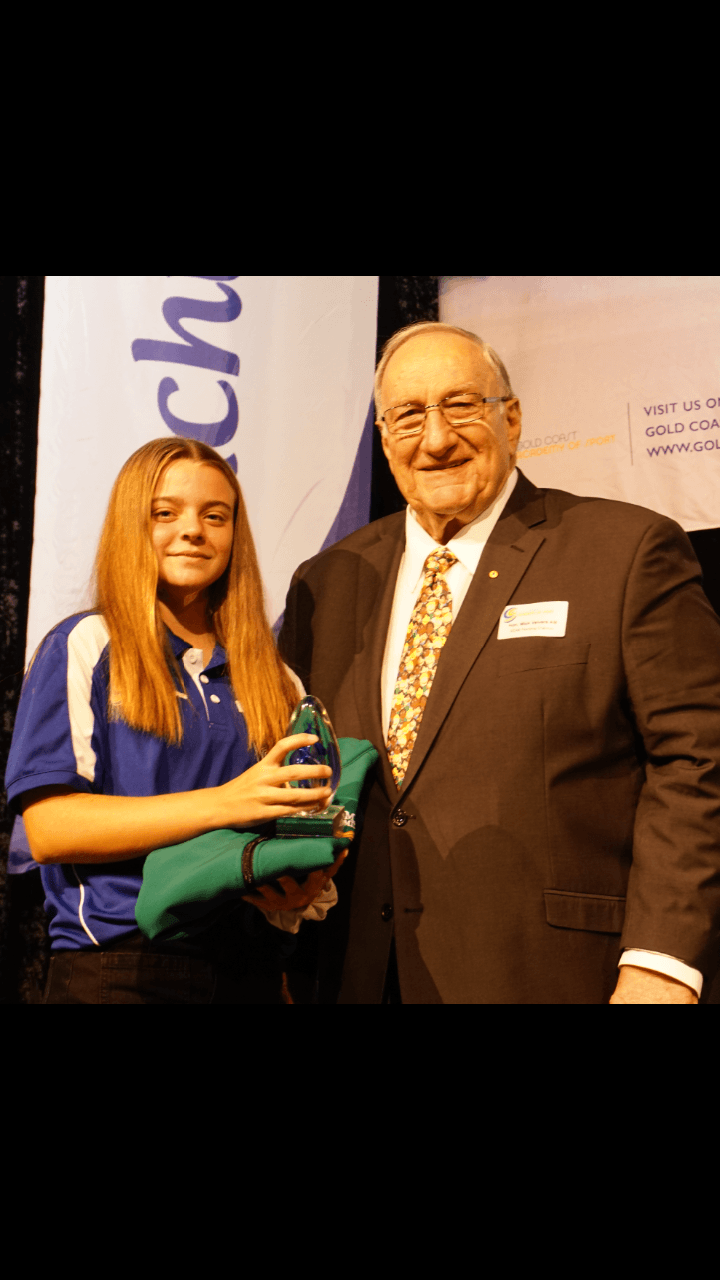 The Gold Coast Academy of Sport is proud to share the recognition of athletes from the annual Awards night which was hosted at the RACV Royal Pines on Thursday 17th October.   On the night, all athletes who undertook our specific sports programs were recognised for being involved and receive a certificate.  Other programs that were conducted through the year such as Netball, Hockey and Cricket were highlighted.

During the night the Academy recognises one athlete from each program with an “Encouragement” and an “Athlete of the Year” award.   These athletes are selected by the coach or coordinator of the specific program and are decided upon through their training ethics and participant in the program.  This year’s winners are listed below.

During the night I spoke about the importance of doing the ‘little things’ well in training, preparation and competition.  I shared some motivational words from the movie with Al Pachino in it – “Any Given Sunday”. There are many movies which have sporting teams scenarios in them, and all are extremely motivational.  This movie really had it all and is one that I am sure, many remember.

He talked to his football team about taking things INCH BY INCH, PLAY BY PLAY.

Life is a game of inches – and so is sport. The margin of error is small – life and sport are made up of decisions and choices.  Inches are everywhere – in training, in preparation, in competition.  Athletes need to fight for those inches – they need to add up all those inches gained.  It does make the difference between winning and losing.  Competition is about heart!!!

In a competition it is most likely that other athletes will be bigger, stronger, faster, or just plain better.  BUT TO BE SUCCESSFUL YOU HAVE TO HAVE HEART. YOU WILL BE REMEMBERED FOR HOW YOU COMPETE!!!!!   This is what makes you a winner, whether you win or lose.  You will not lose in anyone’s eyes if you compete with heart.  I know these words touched a chord with me as I was always conscious of the effort I put in when I competed.  I hope that there are many people reading this now, who can reflect on their involvement in sport.

The Academy gave out three Mayoral awards and these are given to an athlete who has shown outstanding commitment and effort in all areas of specific skill and program study.  Their coaches and fellow athletes acknowledged their contributions to the regular training sessions and their potential to further develop as outstanding sports people.   Oliver Evans-Bucklow from the sport of Rugby Union.  The citation from coach Jack Moon said, “Oliver is the type of player that every team needs. When you are extremely busy and the team needs motivation to keep on working, this young man is still prepared to roll his sleeves up, dig deep and do all he can to ensure his team does well. He runs hard, tackles harder and sticks his head in places that not many rugby players would. His constant work ethic is an absolute credit to how this young man has been raised. He is a young man who demonstrates just how successful a rugby player can be with hard work. This year he has represented the U/12 Cyclones, Oceanic School district and Qld School state champs for the Chairman’s XV’s in Townsville.  He was also named as the most improved player for the U/12 Barbarians Bond Pirates.”

The second Mayoral award went to Nadia WIndelborn from the Rugby League program. The coach Jason Burkhardt said, “Nadia plays for the Burleigh Bears. She started her football career in Rugby Union when she lived in New Zealand but on immigrating to Australia she converted to Rugby League.  She has now been playing for over six years.

As well as playing in a team she is the ball girl for club and senior games whenever needed.  She has been involved with Burleigh woman’s team and the men’s under 20 colts team which plays in the State League.   She has been involved in many different roles from running the tee for kicks, ball girl and generally filling any other job that needs to be done.

Nadia is also ball girl at the Titans games.  Her love for the sport is such that she has also begun to referee at junior games all over the Gold Coast.  Nadia attends Merrimac High where she plays both codes – League and Union.  She is always happy, polite and extremely motivated at all training sessions showing that she is very talented. Nadia was acknowledged at the QRL 2019 Conference where she was recognized by her peers as a young player who has given back to the game in many different ways.”

The last of the Mayoral awards went to Tara Sosinski in the Future Stars program.  Casey West, coordinator of this program said, “At the Australian Youth series for Triathlon, held at the Gold Coast, Canberra and Tasmania, points were gained from each event and Tara finished 1st.  Tara also competes in Track and Field and finished 4th in the cross country for U/18 and 2nd in the U/16 age group nationally.  Along with all the training that she does for Triathlon, she has found time to also be involved with the ‘Positive Purpose Art Project’ at the Genesis Cancer Treatment Centre.  She was involved with the Emmanuel College homeless sleep out and the school festival.  Tara was awarded the Principal’s academic achievement award and the award for effort and conduct at the school.  With everything she does, I am sure no one would question her commitment to what is happening within her sport, her school and her community.”

The Chairman’s award is given to an athlete who epitomizes the values of the Academy which are: Achieve your best in every aspect of life; Excel in everything you do; Inspire others and yourself by your deeds; and last but not least, Respect yourself, the gifts and opportunities you’ve been given and those around you.

Lani’s citation read, “Lani’s quiet but bubbly personality has shone through during the Future Stars program. She listens intently, asks questions and is willing to share her experiences and thoughts with the group. Lani’s work ethic, understanding of self, and calm nature will most certainly aid in her future success. Her main sporting focus is throwing events in Athletics.  She won the State Championships in under 14 and 16 hammer throw and was 3rd in under 14 Discus. She went on to win the National title for the under 14 hammer throw and placed 6th in the under 16 girls age group.

She started playing soccer this year at school for the Runaway Bay 13 years girls team. She wanted to try a team sport and has made a bunch of new friends and learnt a lot about resilience, persistence and teamwork. The team finished 6th out of 8 teams and they are all determined to give it another shot next season.

Lani also wakeboards for fun. She has been wakeboarding for three years and placed 3rd in the local Gold Coast Wake Park competition last year.

Lani is keen to follow her passion of sport. Being a teenager is never easy and she has learnt some important life lessons with a group of like-minded athletes in this program.”

The Female athlete of the year for the Gold Coast Academy of Sport went to Ellie Beer from the Future Stars program which was conducted out of the Southport Sharks.

Ellie’s citation reads, “Ellie has had an amazing year.  She went to Sydney in April and won both the U/18 200m and 400m setting records in both.  Before the national championships she ran a career best time for the 400m in Brisbane at 52.53 seconds which placed her in the top three females in Australia.  She was then selected in the open Australian women’s 4 x 400m relay team to compete at the World Relay Championships in Japan.  The team qualified for the World Championships which were recently held in Doha.  Running the 3rd leg, Ellie clocked a great 52 second run, but unfortunately the team did not qualify for the final and finished 10th overall.  It was an amazing opportunity and at 16 years of age, she was the youngest in the team.  With Tokyo Olympics coming up in 2020, the world is at her feet.

She has been selected as part of the school leadership team for 2020 at Marymount College as sports captain.”

The Male Athlete of the Year is Aikan Granier-Ameur from the Future Stars program linked with the Upper Coomera State College.  His citation is quite outstanding and he has a great future in his sport of Taekwondo.  “Aikan might be small but he can pack a punch.  As a 2nd dan black belt he competed at the national championships for Taekwondo this year where he won gold in the Cadet class.  He then went on to win gold in May in the Gold Coast Open.  In June he won the President’s Cup and also won gold in the sparring competition and poomsae.  In July he received a bronze in the Open Australian championships.  He took home the gold medal in the Qld selections, a bronze medal at the Australian Championships and then travelled to Usbekistan to represent Australia at the World Taekwondo Cadets Championship in August. At 13, this is an extraordinary achievement for someone so young. These are just some of his achievements this year.

During the night the Academy acknowledged the passion and service given by the Founding Chair, the Hon. Mick Veivers AM.  Mick was the Chair since inception and has recently stepped down to spend more time with his family and be involved with his other commitments.  Mayor Tom Tate spoke about his service to the community and to his sport from his early days as a Rugby League player and State Representative in politics.  We all thank Mick for having the vision to start such an Academy to help the youth of the Gold Coast to become better equipped to deal with sporting preparation. 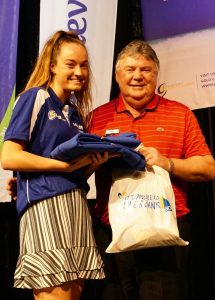 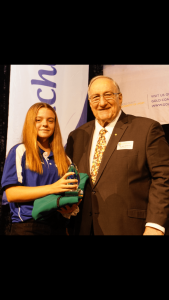 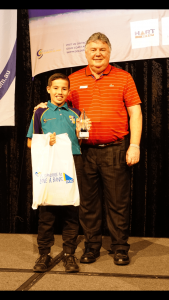 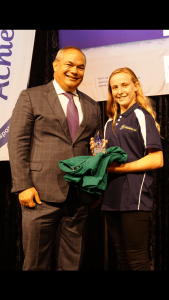 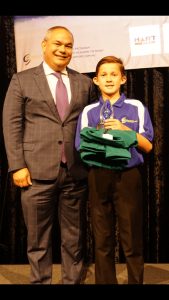 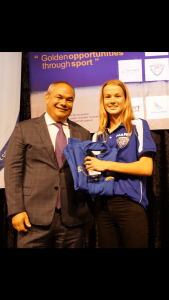 A great night was had by all and it was wonderful to see the expressions of athletes who won awards on the night.  Congratulations to all athletes who participated and particularly to the parents and carers who drive them to training and competitions.  Without you their sporting careers would not occur.

END_OF_DOCUMENT_TOKEN_TO_BE_REPLACED

Scan the QR Code on the Flyer to Apply. Applications close 4th February 2022.