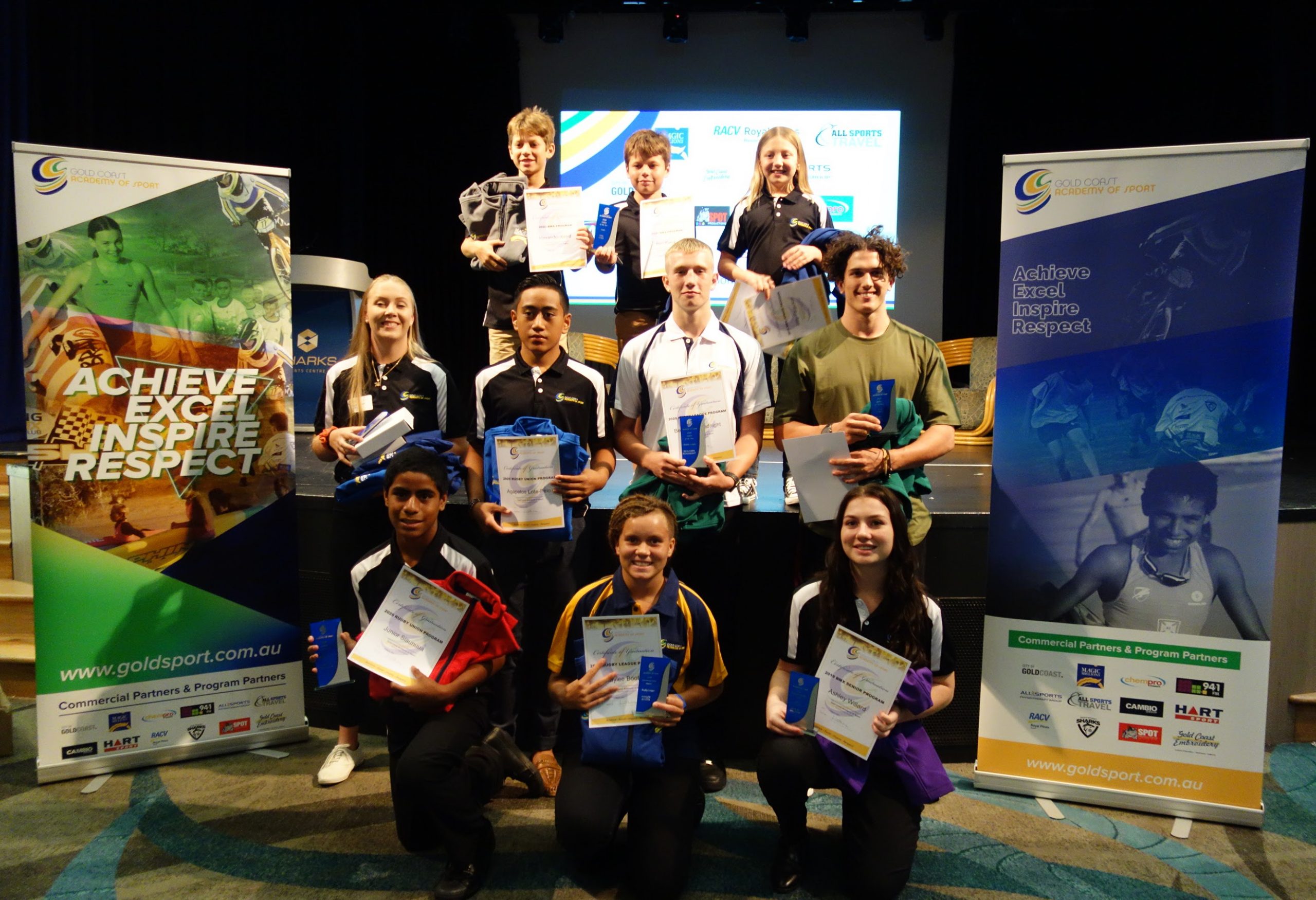 The Awards night for the 2020 athletes was held on 4 March 2021 at Southport Sharks.

Because of Covid-19 restrictions GCAS held far less programs in 2020 than usual.

Milly is only one of very few young girls that like to push the limits with skills, and her attitude

towards trying new skills is above any young girl I have seen. Throughout the program Milly

pushed the limits, riding with the boys and did not back away from any challenges thrown her way.  She stood her ground when riding against the boys. Milly is paving the way for young females in the sport and leading by example. BMX isn’t just about winning, and Milly is proof of that. She is enjoying the ride and is always eager to grow her skill bank – because jumping is still cool.

New to the Australian BMX scene after joining the sport in Canada, Alex has excelled in leaps and bounds. His energy and passion towards training and new challenges blew me away for someone of such a young age. He is always eager and ready for training, with his hard working attitude he became a role model to all those in the group, and this was also evident in his progress on the track. Alex has come a long way with his skills since joining the program, as well as his overall race ability. I’m very keen to see how Alex progresses over the next few months and years.

Ashley has set a high standard of commitment throughout the GCAS BMX Program.  She has shown excellent attitude to both theory and practical sessions and demonstrates her willingness to learn. Ashley is a pleasure to coach, and we look forward to following her BMX journey.

Jesse has demonstrated leadership throughout the GCAS BMX program. Not only does Jesse demonstrate his natural ability on the BMX track, he also spends time with his peers encouraging them with their skill development.  Jesse is a well-mannered athlete with a positive attitude. Having Jesse within the group made coaching easier. Well done Jesse!

BMX was such an exciting program and it highlighted such an amazing sport which is growing every year.  This year in the Olympics we will see BMX as a part of the program in Tokyo.

In 2020 the Academy continued the BMX program conducting a junior program again.  Could those riders come forward and be recognised. These young riders persisted through a time that tested us all.  GCAS commenced the program at the end all COVID restrictions, Or what we thought was the end.  Then all of a sudden, the border shut to NSW residents and unfortunately, a couple of riders lived just over the border but were still classified as Qld riders.  These two riders continued to be part of the program through ZOOM sessions.

Rusty & Isla-Mae reside in northern New South Wales and unfortunately during COVID were unable to attend the later sessions of the program but that didn’t stop them from being a part of the group and learning via zoom. Every session they would attend they did via zoom, learning in the classroom with us all. If that doesn’t show enthusiasm and commitment, I don’t know what does. They have both been great role models to all in the group, showing their persistence and passion to learn, and progress as better all-round athletes. Coach Erin was super proud of both Rusty & Isla-Mae for not giving up when things got tough.

It has been an absolute pleasure to work with Benny again.  He has a hard working yet humble attitude which has been an asset to not only his progression but to all those around him. He has followed in his big brother’s footsteps and has worked extremely hard over the 8 weeks on and off the track.  He was the most improved in the group. His progress through the 8 weeks also led him to making his first state final in a very tough age group. Ben has a positive attitude towards training and is always ready for new challenges.  I look forward to seeing his progress in the coming competitions.

Jack Moon has been coach of this program for the last three years and the athletes love him.  Our assistant coaches are James Purdie and Craig Jones

Agapetos is a player who could quite easily have taken out the athlete of the year award. His physical dominance on the field is easy to see. He inserts his authority in defence and always manages to get over the gain line in attack. The reason I opted for Agapetos to receive the encouragement award is due to his ability to bring out the best in those around him. As a player who is aware of his talent, he makes sure he does his best to pass on his knowledge to those around him. I was particularly impressed with how often this young man would take the extra time to help others. Whether it was little hints or tips or physically showing them the correct technique to improve their performance. I am extremely excited to see what the future holds for his young man, if he can stay motivated and keep up his work ethic. I am sure the future will be bright for Agapetos.

Rugby union 2020 – Athlete of the year goes to Junior Siaunuua

Junior has had an outstanding season involved with the rugby union GCAS program. His passion for the game is shown within every session. Junior wants to learn and takes extreme pride in his work ethic and performance. He is not always the most vocal character but you can see the way he approaches his team mates has a real positive effect. Junior is a true role model for the group around him. He was also one of our leading athletes in the program. His great vision for how the game should be played enables him to execute under pressure and his fantastic footwork gave him the ability to send defenders dizzy. Well done on a great season Junior, you thoroughly deserve this award.

Kaylee always paid a lot of attention during sessions and had a wonderful quality to be able transition from what was practiced in specific skill sessions to apply the skills on the field in play.

She has developed a great skill set and was a joy to coach.  Coach Jason thinks she has a very bright future in rugby league

Ben was easily the best athlete in the group.

His speed, balance and strength meant he stood out immediately.

Coach Jason was in disbelief when Ben told him that he had never played Rep Football!!!

That’s how much the coach rated him.

Ben is Not just a talent, he is a great young man … the coach considered him the first pick for any program he was involved with.

We all would like to wish Ben the best for his future in the sport.

The Encouragement Award for the Junior school goes to Cooper Jackson.  Cooper was chosen for the STAATS BMX Australian Team.  For those that are not aware, STAATS is the major sponsor of BMX and is a type of frame of the bike.  He rode against state plate holders along with some national plate holders in the finals in all of his races. A very tough field of amazing riders. His achievements this year:

The Encouragement Award for the Senior school goes to Charlotte Morse-Tamanui in Year 10.  She was selected by Football Queensland to trial for the Queensland Academy of Sport.  Soccer is a very competitive sport and Charlotte is a gifted athlete. We all hope she can build on this selection to achieve a place in the Academy. With little to no competition this year, 2021 will be a challenging year for her to grow and develop further and put her selection under no doubt.

Well done on your achievements Charlotte.

As everyone was aware COVID affected all sporting activities and whilst we had planned to conduct programs in Hockey, Surf lifesaving, Golf, Netball, Football and our Future stars program, unfortunately, none went ahead.

We look forward to October this year when we can again recognise some of the outstanding achievements of athletes on the Gold Coast.

Our guest speakers for the evening were Juliet Hackett (Jules) from Cheerleading and Emelia Surch from Track and Field.  Both were part of the 2018 Future Stars program.

Emelia is currently completing her final year of school while chasing qualification in the 2022 World Championship team in Heptathlon and 100m hurdles.

END_OF_DOCUMENT_TOKEN_TO_BE_REPLACED

Scan the QR Code on the Flyer to Apply. Applications close 4th February 2022.